Ethereum has very limited support for storing and retrieving any kind of structured data. Smart contracts can only give and take simple values.

Data Strings is our solution to have some structured data without the need to alter Ethereum itself. Whenever a string value is stored on the blockchain, instead of being just text, it can be serialized data.

For example, when using the Suggestions system, the suggestion can have data fields in addition to just a description, like this: 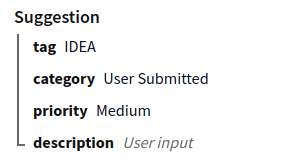 That suggestion is being created with four fields called tag, category, priority and description. Each one has its own value, but on the blockchain they're all saved in the same string variable.

How the data is converted to a string can vary, but we've chosen to use JSON as the first supported format.

The example suggestion above would look as follows. Formatted for clarity:

JSON is not the most compact format, but we chose it for the following reasons:

Blockwell Wallet fully supports Data Strings, they can be used for any string value with the Advanced QR Creator. When choosing the argument type for a string, there is an additional option called "Multiple". This uses Data Strings.

When Data Strings are being used for something that's overwriting an existing value on the blockchain, it can also be configured to combine new data with the existing data.

For example, suppose there's user configuration stored on the blockchain in a variable called userConfig. The user has previously configured that they don't want notifications, so userConfig looks like this:

If the user wants to add another configuration value, for example their color scheme, they would set it to this new value:

If this new userConfig is now saved, the notification configuration will be forgotten.

This problem can be avoided using Blockwell Wallet by setting the data to be combined, in which case the new data will be added to the existing values, which will produce what we want: